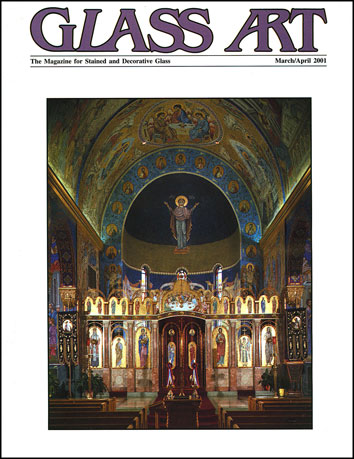 Norbert Sattler: Portrait of a Craftsman Since its establishment in 1993, Sattler Studio has steadily built a reputation in North America for its ability to work with artists, and for its uncompromising dedication to quality. But its story began long before this, in the Rhineland of Germany. Sarah Hall and Jeffrey Kraegel tell the story of Norbert Sattler. A Monument to Faith: St. Sava Cathedral's Mosaics Within its walls, St. Sava Serbian Orthodox Cathedral on the South Side of Milwaukee, contains the most extensive ensemble of mosaic art in the country. Author Judy Ramazzini introduces us to the artist entrusted with this massive project, Italian-born painter and sculptor, Sirio Tonelli. Museum of Glass Receives $11.8 Million In September, The Museum of Glass, Tacoma, Washington, announced nearly $12 million in new funding. With these gifts the Museum has raised $34 million - roughly 60 percent of the $57.3 million goal. The World According to Grebe Robin Grebe creates solitary figures in stark surroundings. In her world, gesture and landscape reveal a story about the way our bodies carry experience. In this conversation with Glass Art magazine, Grebe discusses her evolution to torsos, her casting techniques, and the inspiration behind her work. How Bambi Lost Her Temper and What We Did About It Sometimes things happen that seem catastrophic, but turn out to be not only interesting, but informative and exciting. Butch Young and Rita Long examine an experience with tempered glass and what they learned from it. Creating Your Personal Style Though you may risk a lot of emotional stress, the best work comes from the heart. Debbie Tarsitano discusses creating a personal style. Wind's Eye Gallery Mark Thompson established his studio in 1991 in Sydenham, Ontario, and creates work for a variety of architectural settings. In addition to his own design work, he has developed an interest in the conservation and restoration of historic windows, recently completing an extensive project of 25 windows for St. James, a 150-year-old heritage church which had been destroyed by arson.