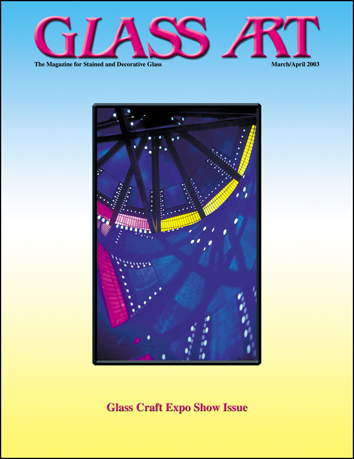 “The Apparition of the Cross to Constantine” Early in 1907, the design and construction of the “The Apparition of the Cross to Constantine” windows were commissioned to F. X. Zettler, of Munich, Bavaria, and his “Royal Bavarian Art Institute for Pictorial Paintings on Glass.” The original works began arriving in 1914 by ship to New York City, then freighted across a nation to Helena, Montana, a town of less than 7,000 people. The Cathedral of St. Helena has recently unveiled these restored treasures. The Flame-Off Imagine a weekend entirely devoted to hot glass and the lampworking community; a combination of the latest torches, tools, glass and visual inspiration. Lauri Copeland reports on Lewis Wilson's “The Flame-Off,” held November 8 - 12 in Albuquerque, New Mexico. Swansea’s Art of Glass Communities of artists are pretty rare things nowadays, communities of glass artists rarer still. They can be exists in Britain, in Swansea to be exact. Take a tour with Richard Porch. Meltdown at Millennium Arts Center The Millennium Arts Center (MAC), Washington D.C., provides a venue for the arts and for artists in its 150,000-square-foot space. Twenty artists working in a variety of mediums rent studio spaces at below average cost. The MAC also boasts 12,000 square feet of exhibition space in nine different rooms. The glass studio of the MAC, called Meltdown, opened in the summer of 2001 and began offering classes in fused and slumped glass. Keeping Art Alive: How Three Industry Retailers Are Working to Educate and Inspire Glass Artisans Across the Country In this three-part series, you’ll be introduced to successful glass art retailers doing business in different parts of the country. You’ll find out not only how they got started, but how they’ve worked to grow and thrive throughout the years. They’re just a few of the people in our industry reaching out to consumers, passing on the love of glass art, and in turn, securing the future for us all. At Long Last Fred Butch Young recaps her experiments with Rapid Mask. Struggles, Objectives and Criteria of Fine Art Debbie Tarsitano examines what is needed to move glass art that deserves “fine art” status out of the “fuzzy area” and into greater acceptance by mainstream fine art shows and galleries. A Murinna Is Worth a Thousand Words: Applying Murinne Cane in the Flame In the September/October issue of Glass Art, Chris Chorvat studied one of the various methods used in making borosilicate Murinne cane. The application of borosilicate Murinna takes on a physical journey all its own.